How High Does a Traffic Sign Have To Be In Georgia?

We had a client who came to us with a Georgia traffic ticket out of Barrow County for violating a traffic sign stating that no trucks were allowed to use a certain road.  Our traffic ticket client was driving what would be called by most people a big rig or tractor trailer.  He is a professional driver with a Georgia commercial drivers license.  His ability to drive is critical to him providing for himself and his family.  The traffic citation attorneys at Goldstein Law Group knew that and attempted to fight his failure to obey a traffic control device ticket.

The Law of Failure to Obey a Traffic Control Device

Specifically, the ticket was for failure to obey a traffic control device in Georgia, which is governed by the Georgia Statute O.C.G.A. 40-6-20, which reads in pertinent part:

How High Does a Traffic Control Sign Have to Be in Georgia?

The important part:  The traffic sign in our client’s case wasn’t high enough.

It turns out that all traffic signs are governed by federal law. The Manual on Uniform Traffic Control Devices issued by the Federal Highway Administration of the federal Department of Transportation is the authority which dictates the height which all traffic signs are required to be in order to be legal. It reads in relevant part:

Standard:
04 The minimum height, measured vertically from the bottom of the sign to the elevation of the near edge of the pavement, of signs installed at the side of the road in rural areas shall be 5 feet (see Figure 2A-2).

How Did Our Atlanta Traffic Ticket Attorneys Prove the Sign Wasn’t High Enough? 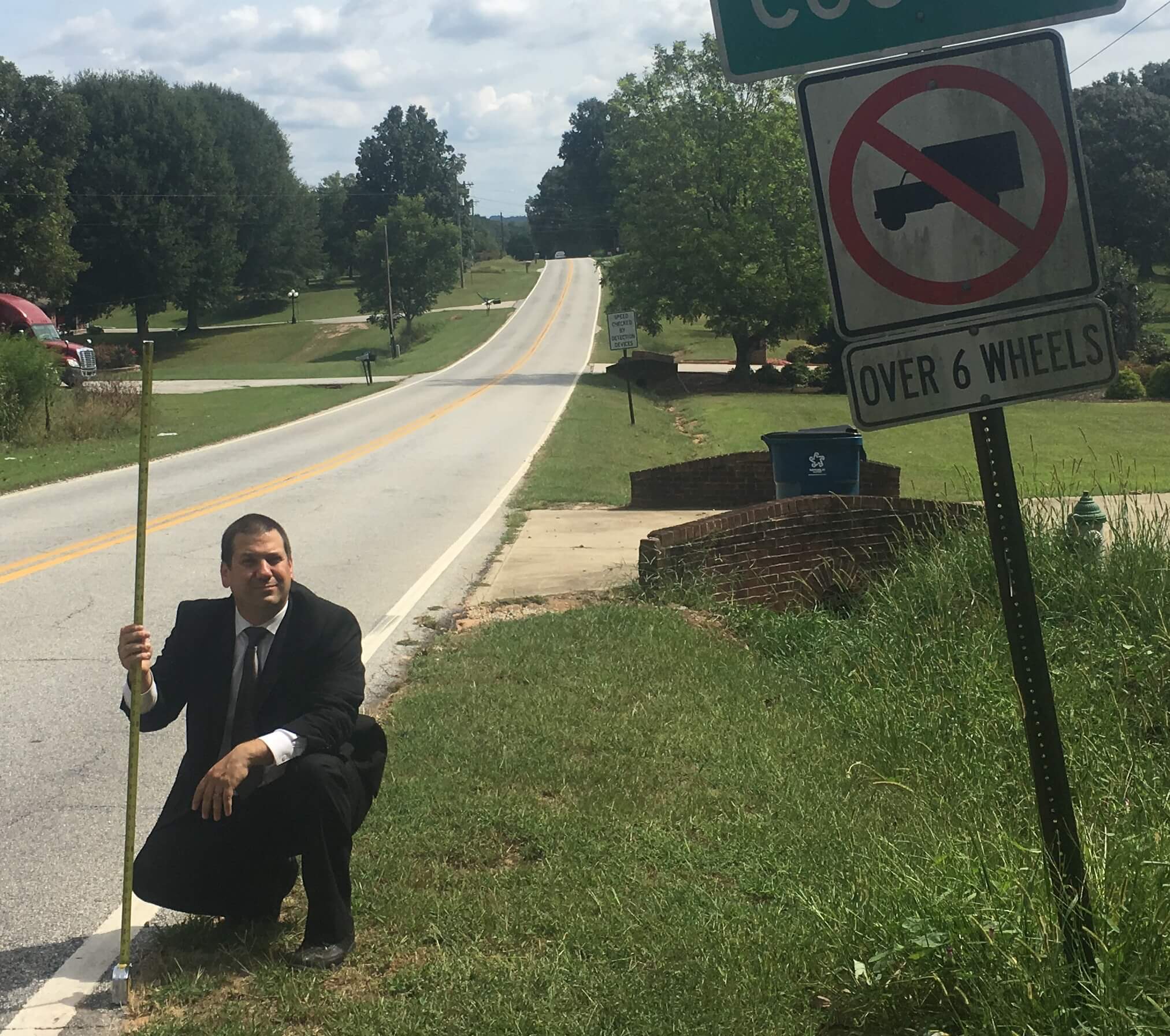 We took a standard tape measure and set it at five feet. We then followed the MUTCD and measured the no truck sign from the edge of the pavement to the bottom of the traffic sign.

Once we measured the traffic control device sign, it was painfully clear that the sign was not high enough according to the standards for traffic control signs set out under the MUTCD.

After our Georgia traffic citation attorneys determined this sign was not high enough, we went to court three times to negotiate with the prosecutors regarding the no truck signs deficiencies. After presenting the traffic court prosecutors with the relevant sections from the MUTCD and pictures of the sign, they agreed to dismiss the failure to obey a traffic control device ticket against our CDL driver client.

If you’ve gotten a traffic ticket in Atlanta, or anywhere in the State of Georgia including Gwinnett County, Dekalb County, Fulton County, Cobb County, or Barrow County, or in the cities of Atlanta, Alpharetta, Brookhaven, Chamblee, Doraville, Douglasville, Dunwoody, Duluth, Johns Creek, Lawrenceville, Marietta, Norcross, Roswell, Sandy Springs, or Suwanee, call us at (678) 757-5529 for a free consultation or Contact Goldstein Law Group online.

About the Author: Sean Goldstein

Sean Goldstein, Esq. is a criminal defense attorney and a former Assistant Public Defender in Douglas County, Georgia, where he defended hundreds of clients charged with criminal felonies. He left the Defender’s Office in 2012 to establish Goldstein Law Group - a personal injury, criminal defense, and immigration law firm based in Gwinnett County that serves all of Metro Atlanta. Attorney Goldstein specializes in successfully defending the drivers of Georgia in their traffic, speeding, and DUI tickets plus shoplifting and marijuana citations. He is highly recommended by his clients and is proud to offer a case by case, client-centered approach with no case being too small.