Georgia treats driving under the influence (DUI) as a serious crime, and the laws are strict. A DUI can bring multiple life-long consequences, as well as considerable expenses.

If you’ve been charged with Driving Under the Influence (DUI) in Gwinnett County, you need to act fast. You may have more grounds for defense than you know about.

After a DUI arrest, you may not know what to do. You may be given some bad advice by a friend, or be tempted to use a lawyer your friend used for something else. Both may not be the best option for your individual case. Finding an experienced Atlanta area DUI attorney is your best chance of minimizing the impact of your DUI, and possibly having it dismissed.

If you have been arrested for a DUI, you should speak with a DUI attorney right away. The first reason is to request a hearing for an administrative license suspension, or ALS, in order to save your license from a suspension.

Georgia is an “implied consent” state. If you drive in Georgia and are accused of DUI, you are considered to have given your consent to be tested. However, if you’ve been accused of refusing any chemical testing (blood, breath, urine) after a valid DUI arrest, your license could be suspended for a full year with no permit.

You may only have 30 days to file an appeal after your arrest or have an Interlock device installed on your vehicle. Otherwise, your license could be subject to an administrative license suspension by the Georgia Department of Driver Services. If you or your DUI lawyer does not request the hearing before the 30-day deadline, the administrative license suspension could go into effect and you could lose your license for up to one year with no permit.

Because DUI is considered serious, there are stiff penalties for those convicted. These can include:

For a first-time DUI conviction, you’ll face penalties of:

To get the full picture of what a conviction brings, and what you can do, speak with an Atlanta DUI attorney right away.

Is This Not Your First DUI?

For a second DUI conviction in Georgia, you’ll face:

Should you have a third DUI, the penalties increase:

Although the first three DUIs are misdemeanors, a fourth DUI is a felony, with many of the same (or higher) penalties:

As you can see, subsequent convictions for driving under the influence become increasingly expensive and difficult. With a felony DUI conviction, you’ll now have a permanent criminal record and could lose your right to vote and carry a firearm.

What A DUI Can Cost You

If jail time and fines aren’t enough, a conviction for DUI can also mean:

Some employers may terminate you immediately upon your arrest, others may terminate after a conviction. (Check your employee handbook for the company’s policy.) You may also have a more difficult time obtaining many types of employment following a DUI.

If you already hold a professional license, a DUI conviction could cause you to lose it. For instance, anyone with a commercial driver’s license (CDL) stopped with a blood alcohol concentration of .04 and convicted of DUI will lose their license for a year. A second conviction results in a lifetime revocation of the CDL.

If you have a medical license, it can be suspended or revoked. Doctors, nurses, EMTs and other healthcare professionals are particularly scrutinized since they work for the wellbeing of the general public. Multiple convictions can jeopardize your career.

Governmental employees with security clearances may also find themselves at risk of losing their clearances after a DUI.

If you are in an accident with someone else while intoxicated, the stakes are even higher.

If you’ve hurt another driver and/or a passenger in another car, they have the option to file a civil lawsuit against you (and your insurance company) to recover damages. This personal injury lawsuit can include compensation for:

Should the accident result in a death of one or more passengers, the survivors can file a wrongful death suit and request similar damages. (This is in addition to criminal charges such as serious injury by vehicle vehicular homicide.)

This type of lawsuit is separate from your criminal case, and can leave you bankrupt, as well as increase your automotive insurance even more.

Representation By A DUI Attorney

It’s never a good idea to try and represent yourself in court for an Atlanta DUI case, even if it’s a misdemeanor. The money you think you’re “saving” on an attorney will be spent elsewhere, and multiply, if you’re convicted. How much money will you lose if you’re sentenced to a prison term?

The right DUI lawyer can save you considerable money in the long run, especially if your charges are reduced, dropped, or you’re acquitted, and possibly spare you jail time.

A DUI is always a stressful experience, especially if you’ve been arrested. The first thing you’ll need is someone who can help you through the court system and get you to the other side. Goldstein Law Group is dedicated to not only helping you in court but offer the best representation available to achieve the best possible outcome for your case.

No attorney can make guarantees on the outcome of any legal case. But you will increase your chances of a better outcome by working with The Goldstein Law Group. Our client reviews on Google and AVVO show how we’ve been able to help our clients through a DUI and give them a better result. We’re ready to do the same for you. All you have to do is call us.

Why Trust The Goldstein Law Group?

After an arrest, you are entitled to legal counsel. You can choose to use a public defender, but you’ll be one of hundreds of cases they handle. Chances are you’ll be advised to plead guilty, and have a conviction on your record. Will he or she work to get your charges reduced or dismissed, and save your driving privileges?

No matter whether you believe you’re innocent or guilty of DUI, having the right DUI defense attorney with you can be the difference between a conviction and possible prison sentence if a court finds you guilty. You may be able to avoid a lifetime of being defined by a criminal record with the right DUI legal defense.

The Goldstein Law Group has the training, knowledge and hands-on experience to defend you against DUI charges. We will comprehensively investigate the circumstances of your arrest, and work to stay one step ahead of the prosecutor.

When you choose The Goldstein Law Group, we will make sure you understand the possible penalties you’re facing and discuss the options you have to avoid conviction. We are committed to protecting our clients’ future, rights and freedom in the face of a DUI charge.

Don’t Be Sidelined By A DUI In The Atlanta Area

Sean Goldstein has been fighting for his clients for more than 10 years. His previous time as a felony level public defender means he understands how to successfully defend someone against a DUI charge.  His five-star AVVO rating comes from the clients he’s helped navigate through DUIs and other traffic-related charges. Sean’s attention to detail means that he will look for the best way to proceed and work for an optimal outcome.

You don’t want to handle a DUI alone—get the best help you can, and fast. Our office is in Suwanee, but we work with clients throughout the Metro Atlanta area.  Contact The Goldstein Law Group today at 678-757-5529, use our online contact form, or send us an email at sean@seangoldsteinlaw.com. With a free 30-minute consultation, Sean will discuss your case and let you know how to proceed. He will fight for you to keep your driving privileges and let you know exactly what you need to get there.

We help DUI clients in these areas:

If your city isn’t listed, call us and ask.

But if you’re facing a DUI arrest in the metro Atlanta area, it’s important to call right away, so don’t wait. 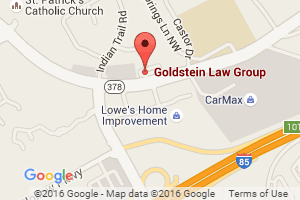